I’m not really sure how it happened this year, but the costumes for the kids are done. In record time. I’m even going to have time to make my niece’s costume. She wants to be Unicorn Girl so she can wear a multicolored dress and a horn. I’m definitely seeing the appeal!

Here are the completed costumes.

Fire Queen aka Fury Demon from the Depths of Hell

First I needed to make a skirt. It took me 20 minutes (20!!) to try and decide which color skirt I thought she would want: black or red. It took way, way too long to realize I could just make a reversible skirt and then I wouldn’t have to worry about which color she wanted. Way too long. I’m still shaking my head. 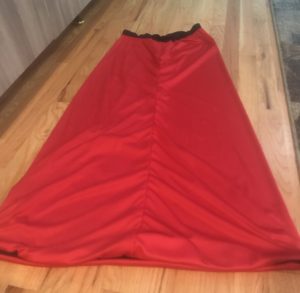 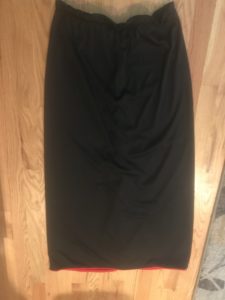 After making the reversible underskirt I got my butt kicked by tulle. There is a reason tutus aren’t cheap and it’s because tulle is a pain in the tush to work with. I bought 15 yards of tulle – 5 yards each in red, orange and yellow. Folding, cutting, refolding, untangling the tulle, and untangling the scissors on repeat for 15 yards of tulle was terribly frustrating. To make the tulle skirt all I did was sew a piece of elastic into a circle, and then loop the tulle into a knot around the elastic. The tulle likes to bunch up so she might have to run her fingers through it a few times to have the pieces straighten out. She was also able to make herself a crown of flames from the leftover tulle pieces. She used the same tying technique around a large ponytail holder that we will wrap around a bun in her hair. Should be awesome! 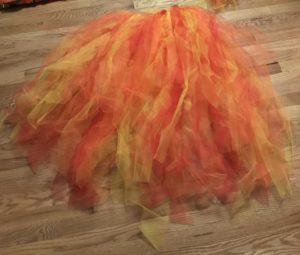 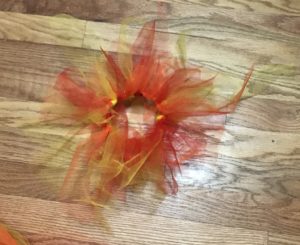 To make this dress I decided to find a tunic pattern, and then make the skirt portion longer so that it would actually be a dress. I should have just bought a dress pattern, but that’s okay. This dress was a learning experience in why it is important to measure your subject and compare sizes before cutting out all of the pieces. I originally cut out the pattern and fabric according to the size 8 on the pattern. After completing the tunic portion I had her try it on. It might as well have been made for a 4  year old. Instead of buying a new yard of fabric I cut out 4 pieces from the scraps I had for the front and back in a larger size via guesstimation, which is why you can see a seam down the middle of the front of the dress. After completing the tunic I folded the fabric to make a circle skirt, and then sewed that onto the bottom of the tunic. I decided against making the leggings (I’m good, but I don’t think I’m that good!) so I ordered them from Primary and they should be here by Tuesday. 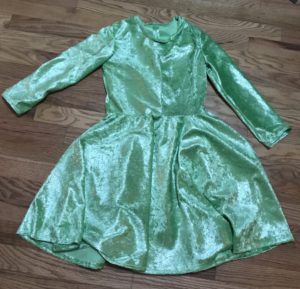 My blue zombie has changed his mind (again!) and now would like to be Spiderman. I’m pretty sure that costume will be purchased from a local retailer. Heck, even Peter Parker had a hard time making a Spiderman costume.

The next costume I am going to make is for my niece. Originally she wanted to be Rapunzel from Tangled. From there the costume changed to “Rapunzel with a blue and pink and purple dress” and then to “unicorn girl with a purple and pink and blue dress and a horn, please.” So that’s next on my list.

The fact that 1. I don’t hate my sewing machine right now, and 2. I have the time to make a Unicorn Girl costume is invigorating! I almost feel like I could take on making clothes from scratch. But lets not get crazy now! That can wait until the summer! Or maybe we can make pajama pants for Christmas. So many ideas!